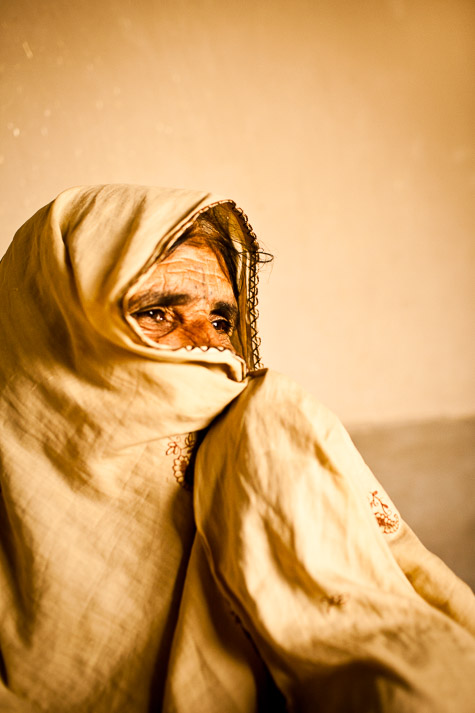 Addendum, August 2021: Given the unknown future for women in Afghanistan, all names and locations have been changed to protect identities.

It was during the Nowruz holiday that I first learned of Mercy Corps’ poultry program. The vocational training center I had come to Afghanistan to photograph was closed for the Afghan New Year, so Mercy Corps’ staff were considering other projects to make my time productive. They explained how the poultry program teaches women about raising chickens and running small businesses selling eggs within the local community. The eggs provide both income and food for the women’s families. There’s a similar program teaching women to raise dairy goats to sell the milk. 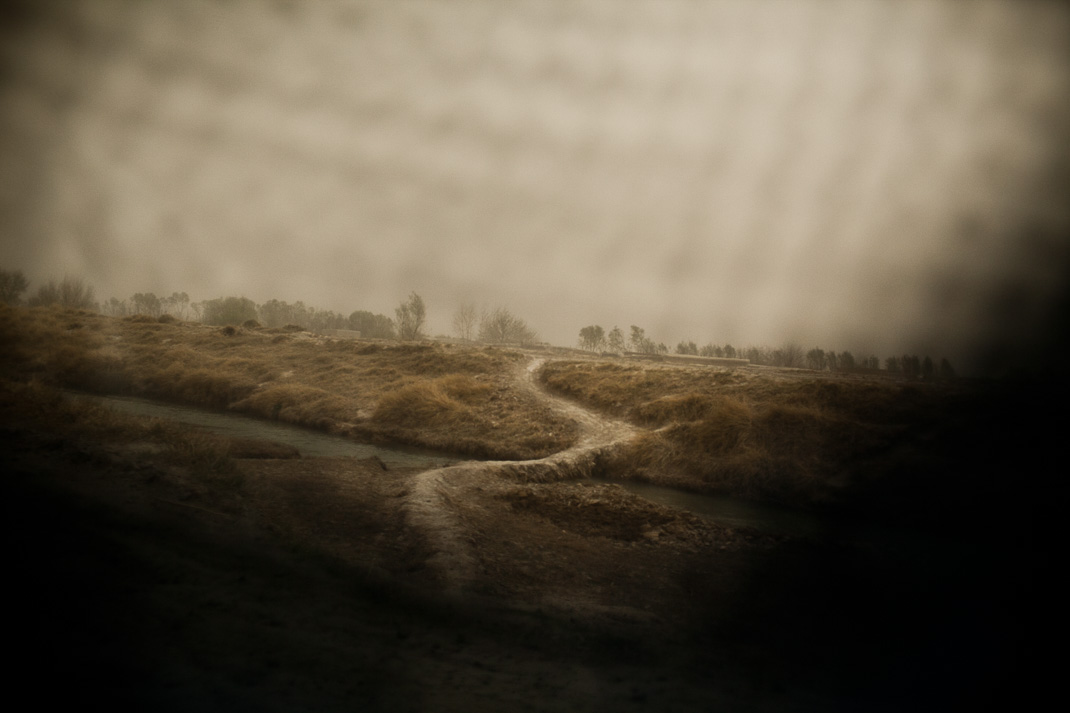 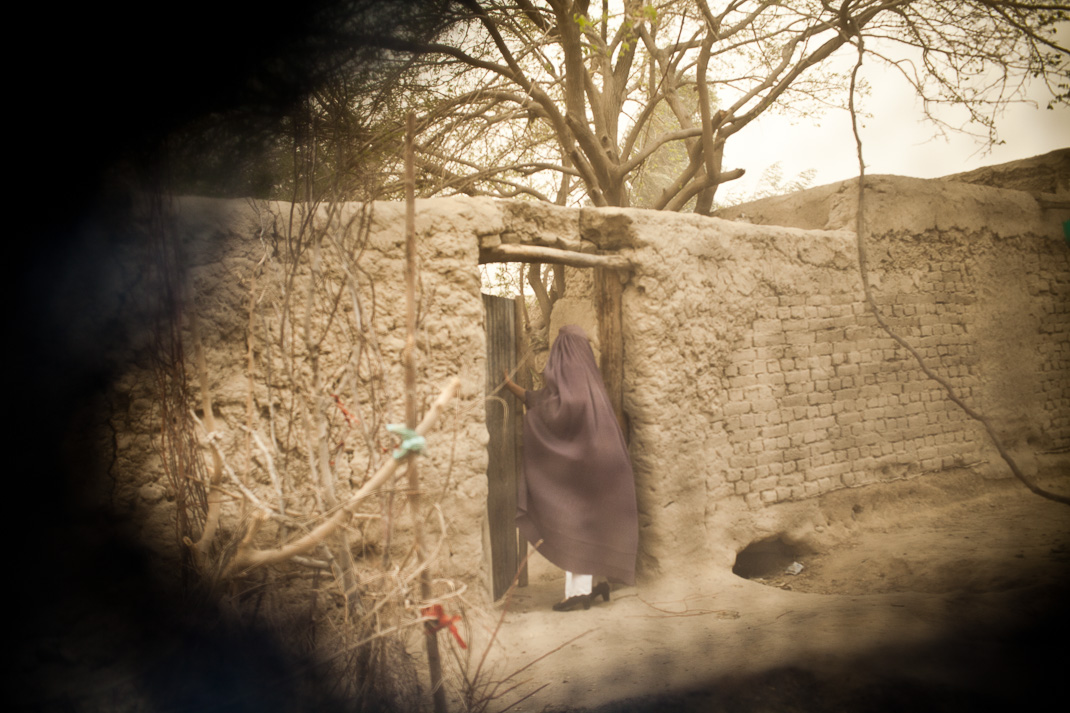 The 45-minute journey to Gelan to meet women in the program traversed a bumpy, rocky, dusty road, primarily through what appeared to be farmlands. Trucks and other vehicles passed us, this clearly being a thoroughfare of sorts for the area. Pretty frequently, large rocks kicking up from tires clobbered our car. If you were skittish at all or had experienced the trauma of combat zones, it would be pretty easy to become unnerved by the sounds. The “pop,” “smack,” “bam” could be experienced as bullets battering the vehicle (the number of military personnel and guns that you see on the streets only affirming this alarm).

We traveled in a province where women are not allowed outside the home without being fully covered by a burqa. Abiding by local customs, that included me. The burqa also added a layer of safety by not drawing attention to my presence. “Women are very easy to kidnap,” a program director who I think highly of told me. A chuckle went through my mind, knowing that part of the reason is that when women wear a burqa, it’s difficult for them to see! But I knew what he was alluding to. A foreign woman connected to an American NGO could be a rewarding prospect if kidnapped. At a minimum, it would cause a host of issues for Mercy Corps. At maximum, well, I considered that before coming here.

So I sat in the vehicle and observed the miles, filtered through my burqa’s blue embroidered eye grille. I found fascinating the experience of seeing without being seen and the anonymity of being covered. I appreciated viewing the world in the way that Afghan women are required to during their day. 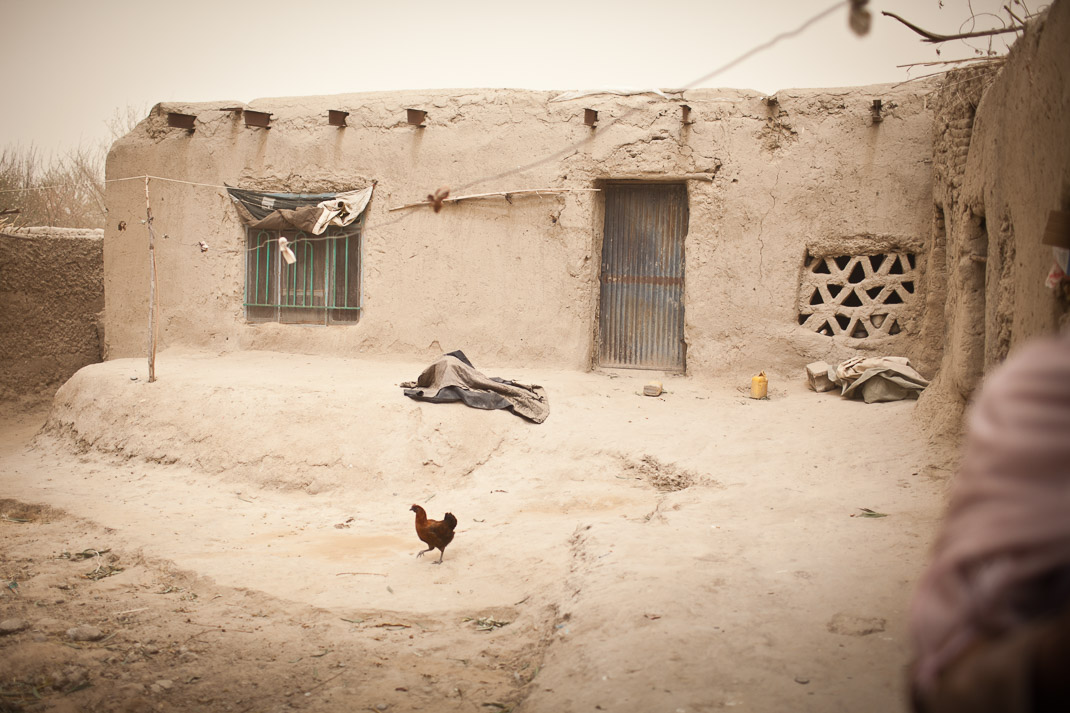 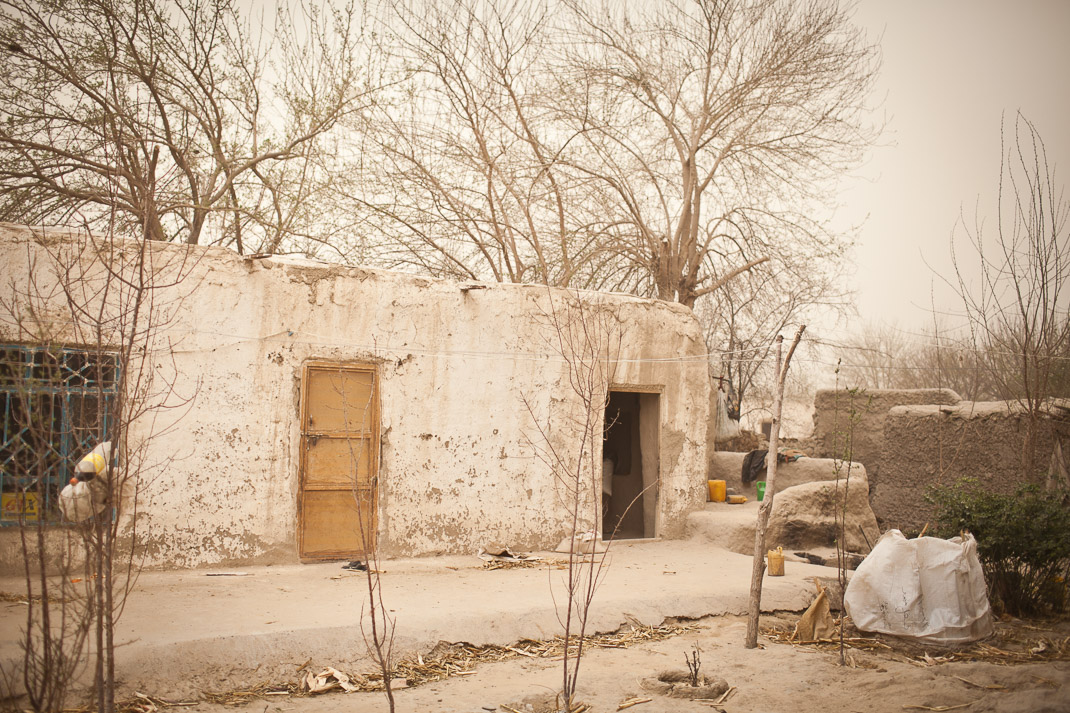 When we arrived in the village, the air held a bitterness much colder than in the community we left. A dust storm from the west had blanketed the region the night before and continued to blow. The air was a murky golden brown, and we quickly entered the home of one young woman in the program. We had arranged to meet our main subject, Gul BeBe, there to protect her privacy when I interviewed and photographed her.

The scene inside was beautiful. Watching the young woman crouched by the doorway, I desperately wanted to start taking photos. But I knew the sensitivity of this situation. Village families are unaccustomed to having foreign visitors. So my presence here, if found out, would invite gossip and a potential backlash of negativity for these women who are doing nothing more than trying to improve their lives.

Already, there is immense jealousy in the region toward them. Tayeba, who runs the poultry program, and her team, work hard to dispel any rumors or negativity arising from others. It’s a job of diplomacy and delicate human relations.

I asked to photograph the young woman sitting by the doorway. “No,” is the reply, translated by Tayeba. “I do not have permission from my husband.” 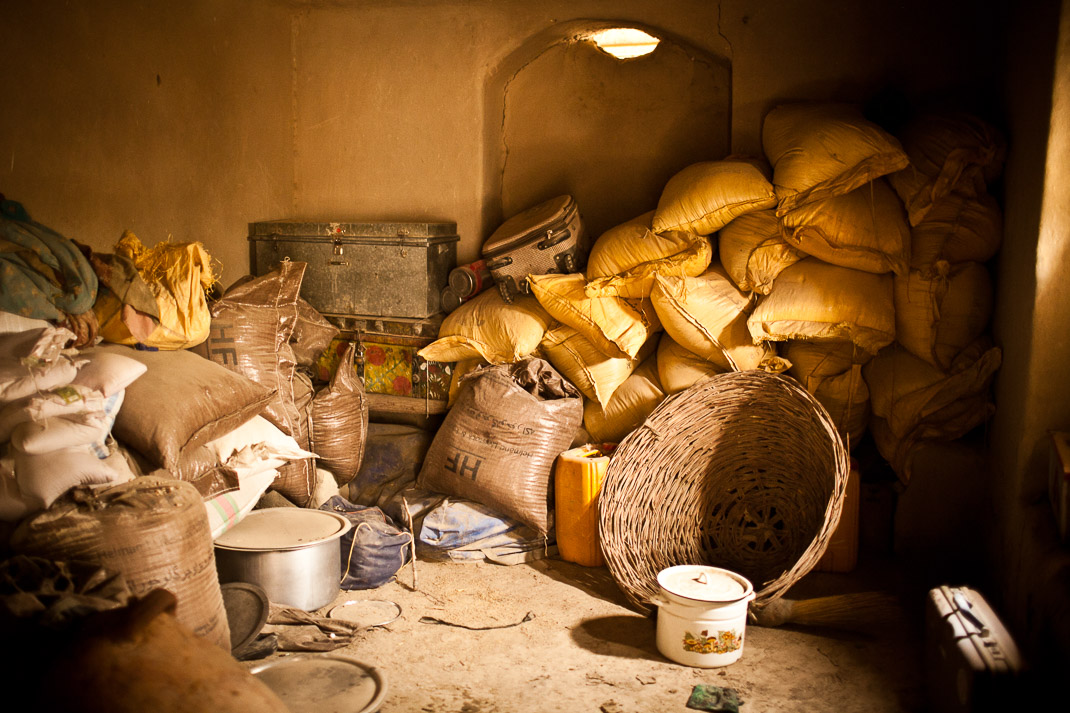 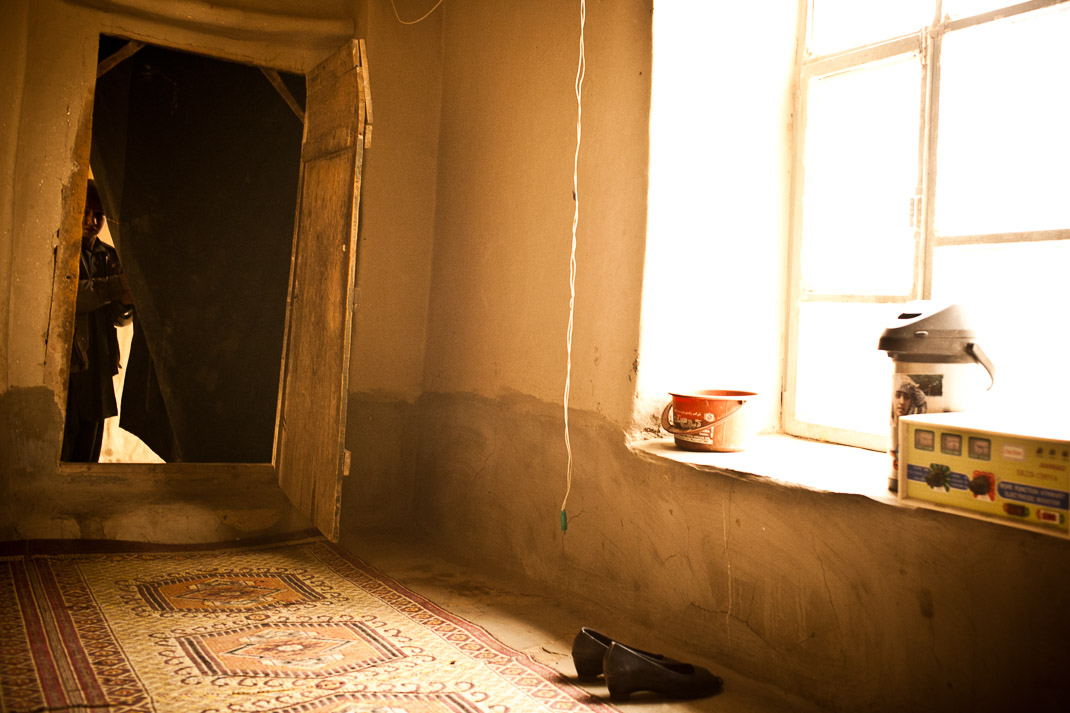 “We were jobless, and now we have jobs. Like the city women can work as teachers and officers, the village women can find a job in poultry and dairy goats and can have a small business.”
– Gul BeBe, age 70

Gul BeBe finally arrived. Tall and elegant, although slightly bent by age, the 70-year-old still carries the trademark Afghan poise that I saw in both women and men. There is a dignity to Afghan movement, in particular from the middle and older generations. It seems purposeful, unhurried, refined.

“I got married when I was 12”, Tayeba translates for her. Gul BeBe had 12 children (nine daughters, three sons). Still, in her already long life (the average life expectancy for a woman in Afghanistan is 44-years), she’s lived through five of them dying.

Life is very different for village women than for those in Afghanistan’s cities. Gul BeBe described a life with no educational opportunities for women, even now. But the poultry and dairy goat programs have changed their lives in her village.

“We were jobless, and now we have jobs. Like the city women can work as teachers and officers, the village women can find a job in poultry and dairy goats and can have a small business,” she explained.

Mercy Corps’ two-month training program taught her how to feed the chickens and care for them when they get sick. This sole source of income is the first time she’s earned a living in her 70 years of life. 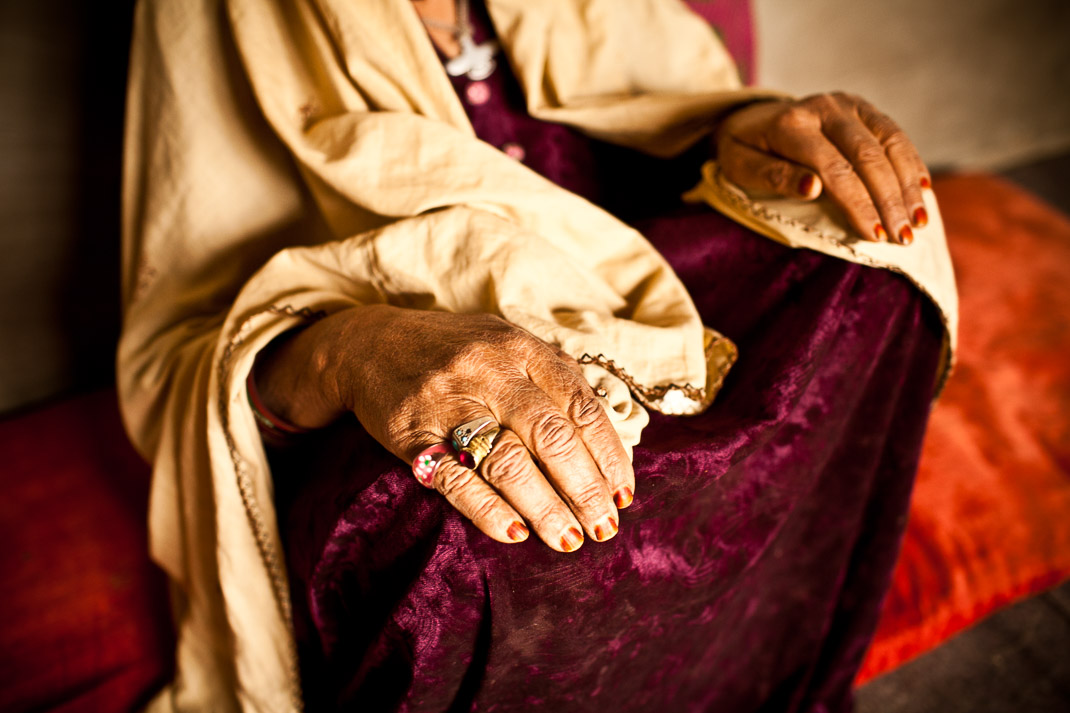 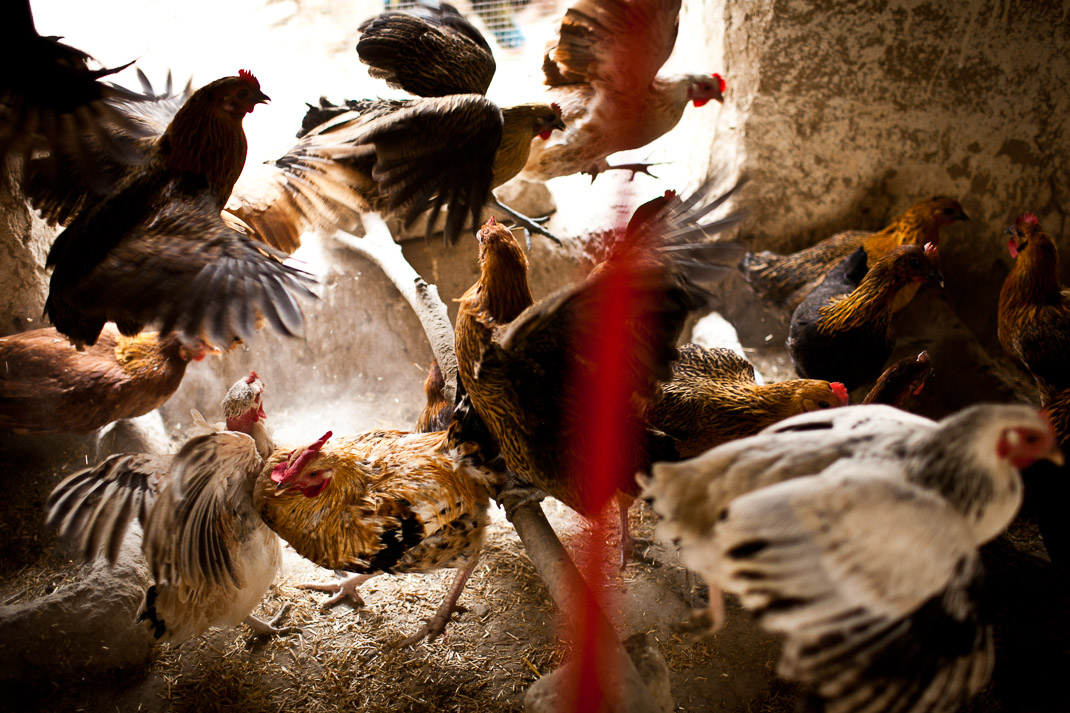 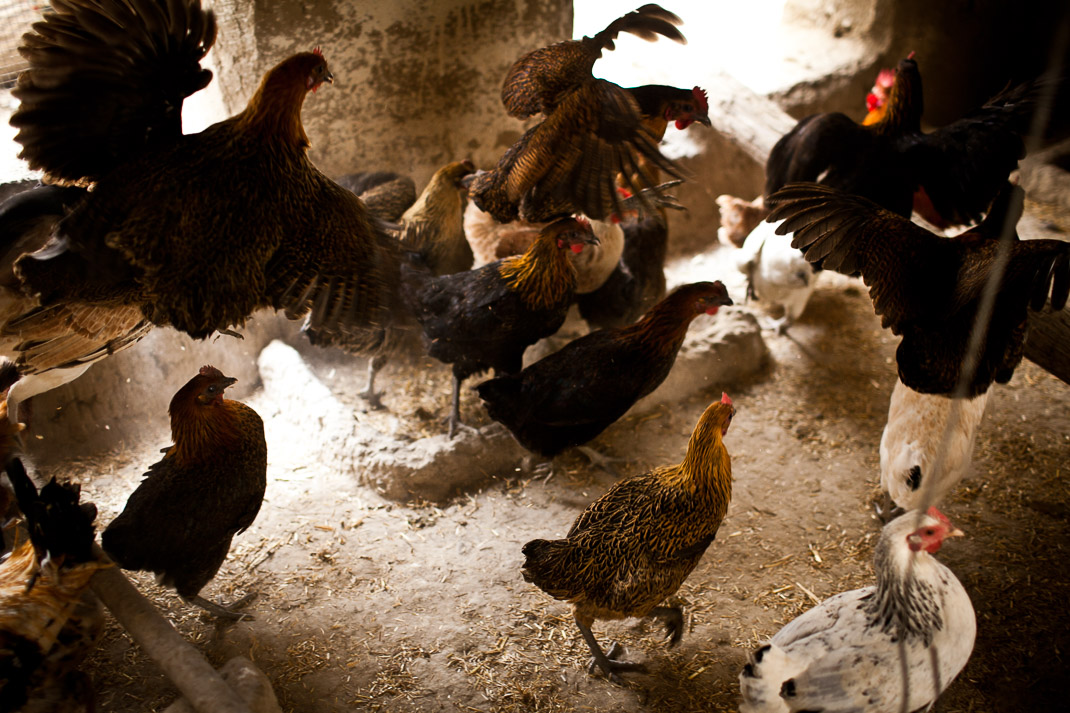 I finished the interview on time but was quickly told that my 30-minute window to take photos had been cut in half. Frustration. Acceptance. Okay, I have 15 minutes.

I’ve spent a lot of time around families in my work, particularly in unfamiliar, distant situations. For children in a remote village, it’s a rather exciting affair for a photographer from some faraway place to be photographing within your community. So, being focused on my work, I wasn’t concerned about the random kids who started popping in and out to see the foreign attraction.

I also knew that I had a job to do, and if I didn’t get a decent array of photos of Gul BeBe, the interview I just completed, which went very well, would be for naught. We needed pictures to accompany the audio and text.

Gul BeBe wears a joyous fortitude that makes me think she must be well-liked within her village. I began making portraits of her, asking for her face to be mostly covered. To my surprise, she wanted to fully reveal her face in photos. I admired her strength (in this highly patriarchal society, it’s her husband, not her, who holds ownership of such choice). Still, I knew I needed images that did not identify her for her safety. I photographed for maybe two minutes, and then the commotion began.

Even so, checking in with Tayeba about the time available, she offered that I did still have 15 minutes. So I returned to the job at hand, continuing with the photos. Calmness was there for a minute or two, but then behind me, the urging started again. “Hurry, hurry! Quickly!”

The room had transformed into a state of flurry and confusion. Children were buzzing in and out. Several female neighbors entered to check out the foreigner, and tension in the air notably increased.

Okay. Something is wrong. We need to go. Now.

We left that family’s home. We needed to leave the area immediately. 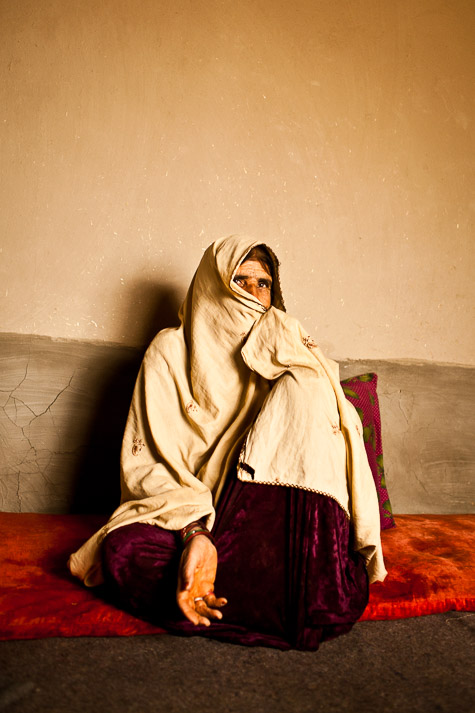 I was quiet and sobered on the drive back to the Mercy Corps office. I worried about the women and hoped our effort to tell their story wouldn’t bring them harm.

I found out later that the staff members were afraid that the children would tell the village about a foreigner being in the home. They were fearful that Gul BeBe would get in trouble with her husband for letting a foreigner photograph her. It was an audacious leap for her to take that risk. She did because she understood how her story could help the growth of the poultry program — and help other women and their families.

The next day, while sitting in another family’s home having tea, Mercy Corps staff said to the women hosts (referring to me), “She is very brave. She went to Gelan district.”

I disagree. Bravery is a 70-year old Afghan woman agreeing to meet me and be photographed, at the risk of enraging her husband of 58 years. Gul BeBe, and that experience, taught me a lot that day.